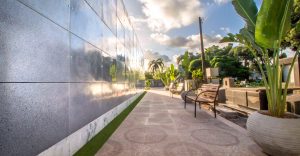 In Brazil the reduction in capacity of existing cemeteries and the lack of space in cities for building new in accordance with environmental legislation have become a huge problem in the country.

“The legislation is very recent and cemeteries are very old, which leads to a mismatch,” said Genival Nunes, president of the State Administration of Environment (Adema) and State Secretary of the Environment and Water Resources (Semarh).

The law has a number of rules for the operation of cemeteries, as the distance of 1.5 m from the lower level of the reservoir to the water table, the distance of five meters from the burial area to the wall of the cemetery, water drainage system rainwater to prevent flooding, among others. “Rare are the horizontal cemeteries can be within these rules, only the most recent,” says the secretary.

horizontal cemeteries are those whose burials are made by burial. The concern is by production necrochorume, decomposition product of the human body rich in gases and liquids that cause damage to the environment and therefore to humans. “It’s not that you can not have horizontal cemeteries, but have to follow the rules for environmental protection, such as waterproofing of deposits and treatment of necrochorume,” said the secretary.

Horizontal cemeteries that exist and do not fit the Brazilian Resolution 335/2003 CONAMA must be programmed to shut down their activities. “The closure plan the activities of these cemeteries should have been completed in 2010, as pointed out by the resolution, but no one in the country did,” the State Secretary of Environment. According to the resolution, the closed cemeteries would become space for public use, such as parks and squares. “It would be a place only for visits, as a memorial,” he added.

The difficulty for the capital of Sergipe-Brazil is that there are virtually no physical space to accommodate new horizontal cemeteries. According to the secretary, where there are large tracts of land, such as the expansion zone, they are areas that do not have enough depth to keep a safe distance from the water table, which would cause contamination.

An alternative found in other cities of Brazil and the world are the vertical cemeteries. Are buildings of two or more floors offering locules, or drawers, for burial and should have inactivation system of necrochorume gases and sealing system so that these gases do not reach the common areas visitors and employees. Vertical cemeteries have, besides the loculi, crematorium, ossuary and cinerary.

The most vertical cemeteries uses necrochorume treatment system with assisted aerobic decomposition, which appeared in the United States and Japan. The decomposition takes place in
the presence of air, avoiding the production of liquids and gases follow for a deactivation chamber contaminating gases . The maintenance and care of these systems must be constant, since any leak generates social and environmental disorders.

The largest vertical cemetery in the world is in Santos. It is the Memorial Necropolis Ecumenical, which was established in 1983 and has over fourteen thousand locules, over fourteen flo
ors.